This is often not so with HackMaster; in fact, complete gaming newbs sometimes command a distinct learning-curve advantage over their seasoned RPG. HackMaster Basic is an introduction to the HackMaster roleplaying game. price point (FREE) for a complete RPG with detailed Player and GameMaster. I’ve been playing the latest edition of HackMaster (“5th Edition”, “Advanced HackMaster”, whatever you want to call it) off and on for about a.

Please browse through our FAQ before posting. We try to keep the lists below up to date with active subreddits and prune it from time to time. The above image is licensed under GPL 2. Where’s the HackMaster love? I’ve been playing the latest edition of HackMaster “5th Edition”, “Advanced HackMaster”, whatever you want to call it off and on for about a year, and regularly for a little over a month now, and I have to say it’s hands-down my favorite tabletop RPG to date.

What is HackMaster Basic?

So I wonder, who here has played HackMaster, and what are your opinions on it? Like it, love it, hate it? What works and doesn’t work for you?

I’ve flipped through it and bought a couple of the books, but the humour is pretty annoying and keeps any of my group from wanting to play. While I personally think the humor is great and sets the writing apart from that of a lot of other RPGsI can definitely see how it would grate on some people. Humor aside though, what did you think of the rules for the character generation and combat systems?

If you can stomach past the writing style, I’d definitely suggest giving the game a whirl or, barring wanting to tackle the learning curve for a game you ultimately aren’t sure you’d enjoy, try giving their HackMaster Basic a go, just to try out the combat system if nothing else. I honestly loved the ruleset from what I’ve read. I think I would enjoy it more than what we’re currently using pathfinder.

They just can’t get past the humour. Every time I bring it up, they dismiss it as a silly joke curiosity. Unfortunately, so much of that humor carried over into their “legitimate” edition that it still turns off a lot of gamers who expect more — I dunno, seriousness, I guess? But I can tell you from experience, the game itself is only as silly as any other RPG once you play it, which of course is all dependent on the group itself.

If you can convince your group to give it a go, even just once, I definitely suggest you do. Plus those books are freaking expensive! I feel bad that you bought them and haven’t been able to use them yet: I got mine at a convention from the discount bin, so I’m not worried about it, I prefer reading rule books to novels anyways. Out of curiosity, was it for the latest edition of HackMaster, or for the actual 4th edition parody?

If it is, that would explain a lot about why your gaming group would be hesitant. After all, it’s intentionally a parody. Then I’d also suggest taking a look at HackMaster Basicthe simplified rules for the new, legit edition.

It retains a lot of what made the older edition of HackMaster unique such as Honorand a lot of the non-crunch rules are backwards-compatible with what you saw in the 4e books. But the system itself has been completely overhauled and is truly a unique experience. I played a demo of it with a group of friends at GenCon last year. That gives you the rules for character creation and info enough to run campaigns up to level I’ve been running a campaign I created since.

I’m planning to buy the books at GenCon this year. Out of curiosity, how do you handle some of the things that require the GameMaster’s Guide that isn’t out yet? Things like Formal Training, Magic Items, etc. I was lucky enough to get both the Hacklopedia and the PHB for Christmas, and while I haven’t read completely through them yet, the humor seems way reduced from what I remember of 4th edition.

I wanted to take 4th seriously, but it’s incredibly hard to do considering the parody aspect. From everything I’ve read about Hackmaster 5e, it takes a few sessions to get the hang of, but once you do, it’s pretty intuitive and seems to make sense.

I’d love to start a small campaign with a few buddies one of these days. The books are expensive, yes, but IMO they’re totally worth the price. Some serious, serious thought went into the production and design.

This is pretty much spot on. The rules seem daunting at first, but once you have a few games under your belt they start becoming second nature and feel far more fluid than most other d20 games I’ve played.

The production value in those books is outstanding, the Backmaster especially. And you’re absolutely right, they’re right in the same price range as many hackmster tabletop RPGs. The Hacklopedia is incredible. Nevermind the stats, I’ve actually browsed through it as reading material before bed.

Some great entries in there, especially on some of the more classic races like goblins, orcs, elves, etc. HackMaster would have been great hackmastfr years ago, but then again, RuneQuest already did a lot of what HM does now. Ahckmaster, I’m interested in an entirely different type of RPG, mainly because time constraints make the traditional campaign based RPG completely impractical. It certainly has the same old-school aesthetic as other games of that era, but there’s a lot of games popping up right now that strive to emulate that style.

I hear ya, man. It’s probably for the best, in my case at least. If I had as much time to spend playing or running campaigns as I’d like, it’s probably all I’d end up doing.

The second point is pretty much why the first. My group will be playing it soon. I’ve been looking at the book, and honestly, I don’t get the attraction.

The char gen system looks very complex. What’s the benefit of this? It can’t be that you get to build the exact character you want, because it’s essentially random and you’re constantly penalised for going against the randomness.

So I’m left thinking hackmastee complex for the sake of being complex. What’s the attraction of this game? Is it really elegant to run? Does the combat system result in really interesting, intricate encounters? Help me to understand what you see in it. In all honesty, character generation isn’t really all that complex or even random, in most instances. The way the book words certain things often makes the game seem far more complicated than hackmastre really is.

Character creation actually flows very smoothly, and once you roll one or two characters, you’ll quickly get the hang of it.

You’ll never have enough Building Points to pick up every talent, proficiency, or skill that you want, so right from the beginning you’re asked to make tough decisions, to decide what’s more important for your character build. As far as the randomness goes, it’s important to note that you’re never penalized for going against it at least as far as the initial roll for ability scores goesbut rather players who accept the randomness are rewarded for doing so.

The game creates a minimum baseline for character generation, and those who accept the randomness normally get to start above that baseline. Those who reject it never fall below that baseline.

If I take Pathfinder as an example, it’s perfectly common to see a player roll a half-orc wizard I’ve rolled two myself, actually.

While fun, it can certainly ruin a setting when those things become rph. It takes the wonder and hakmaster out of them, and makes them just another PC. HackMaster specifically sets out to be a fantasy game that’s grounded in a more realistic, gritty world, where anything is technically possible, but some things are far more commonplace than others.

To emulate that environment and setting, HackMaster took the option to make rare character-types away from the players, and lets probability decide if those concepts will come into play. Obviously attraction is subjective, so I can’t speak for everyone, but personally, I love that the game sets hackmastdr and asks me to adhere to them, rather than allowing me to steamroll the rules in order to make my own perfect character.

I love that it forces me to play an imperfect, flawed character who will actively struggle to get by in the world. Hacmkaster is handed to me on a silver platter; I have to fight for everything, whether that “fight” is a literal combat, or in just the tough decision of where to place my precious Building Points at hackmazter creation or level up, and that fight makes the entire game so much more rewarding.

As far as the elegance of running the game hackmasger, let me start off by saying that, for new groups that don’t have someone who’s played HackMaster before, the first few games will be very “stop-and-go”. The game flows more smoothly than any backmaster d20 game I’ve ever played, but only once you understand the rules.

Until then, it can be a hassle. There’s a learning curve, but in my opinion it’s hackmasyer learning curve that’s well worth the end result. Combat is extremely elegant and very freeform, but again that’s dependent on understanding gackmaster combat rules. It’s much more simulationist than other games, and as such allows for a lot of freedom and strategy.

That freedom allows for a game where every new enemy feels like a unique encounter, it allows the environment to be taken into account far more easily, and is actually far more easy to run for the GM, as the uniqueness of enemies isn’t solely in their stat blocks or special abilities although many enemies do indeed have special abilities that you should watch out forbut also in the tactics they employ in battle.

Of course, how awesome any combat encounter could potentially be is largely determined by how good the GM is, but that’s a caveat in just about any tabletop RPG. It’s also worth noting that Hckmaster is clearly not a game for everyone, and the introduction in the Player’s Handbook clearly states that. It specifically isn’t trying to cater to everyone, but rather to the niche it fills. That said, I think that everyone really should give the game a solid chance. 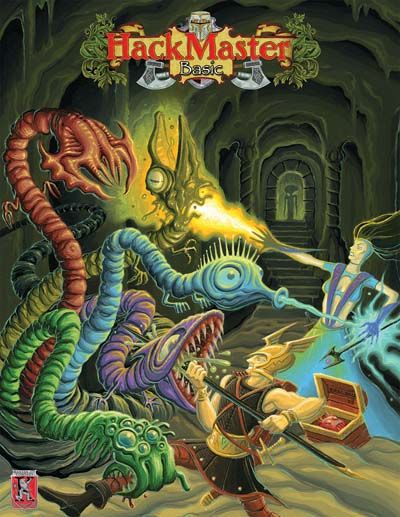 It looks far more intimidating than it really is, and offers hackmqster truly unique that I think just about anyone could appreciate. I hope that answers your questions. Please feel free to throw any more my way, if you’ve got them!

Accept the randomness and start with more points, reject the randomness by sacrificing points – these are functionally identical concepts, so I think hakmaster question stands.

I love that the game sets boundaries and asks me to adhere to them, rather than allowing me to steamroll the rules in order to make my own perfect character. You’ll never have enough Building Points to pick up every talent, proficiency, or skill that you want. My problem with these statements is that I can’t think of a single game system that they don’t apply to. In general I think that, where you’re singing this game’s praises, your points often apply to lots of other systems.

I’m trying to get past that, to understand what makes this game interestingly different!