This site uses cookies to help personalise content, tailor your experience and to keep you logged in if you register. By continuing to use this site, you are consenting to our use of cookies.

Headphone Reviews and Discussion – Head-Fi. Jun 29, at 5: Post 76 of Alright, I did a bit more research with the USB controller. If we want host capabilities eventually, I daatasheet mean in the first version of the softwarewe should probably try the ISPaccording to its datasheet, the peripheral capabilities on the chip are the same as the ISP The ISP would need more work than a simple usb-to-ata bridge, but rockbox supports a player with that chipset so there’s some example code to build on.

Or if we want to completely drop host capabilities from the first revision of the hardware, we can try looking at cypress’ usb-to-ata bridges. They might not work, as I’ve just glanced at their specs so far. If someone wants to do some hunting, find a distributor that stocks CY7CC in reasonable multiples.

Argh, actually I did a quick digikey search and none of them are stocked by digikey and vatasheet a minimum quantity of at least or so. Unless someone can find a good source, I think we’re going to end up going for the ISP A bit more work at first, but at least we’ll be able to do usb host in the datasheeet.

Jun 29, at 6: Post 77 of All of the ones you mentioned are essentially the same. The ISP is probably your safest bet however. It is cheap and will not go obsolete for a long, long time.

It’s not too difficult to create a mass storage device. Jun 29, at Post 78 of Wouldn’t that mean a buffer and nice clock needs to be added? Jun 30, at 6: Post 79 of I’ll do another thread for the audio section. The first version of the firmware indeed will probably be something really simple, maybe just a WAV decoder.

If it turns out to be not too difficult, there is a possibility that FLAC decoding will also be in the first version, or maybe even rockbox. Since this will be programmable by replacing a firmware file on the hard drive or possibly some other meanswe can easily release a more advanced firmware for the DAP later on without any modification to the hardware. Jun 30, at Post 80 of I take a close look to the evaluation board MC3 and the Audio daughter board.

I have done a list of the main components not the resistor, connector, jumper, capacitor Fairchild single unbuffered inverter U11 LMS Fiber Optic Transmitter-Receiver U8: Fiber Optic Transmitter-Receiver U3: Jun 30, at 4: Post 81 of Thanks, I’ll look into the evaluation board–might be useful to look at for our design. That was over a year ago that I was researching this, though, so things might have changed. I’m checking right now. BTW, I’ve split the audio hardware design section to another thread.

Jun 30, at 7: Post 82 of We just need to clean it up and find some alternative chips. This really shouldn’t be too hard to do, and you then have access to most Linux software. Uclinux can run on the MC3. I’m still thinking about whether or not we should base the USB on a chip that’s capable of USB host and do the code for host functionality later or if we should just use a plain USB peripheral controller and require a new board for USB host functionality.

The host function is usefull if you want to connect a Portable player to the Dap without the need of a PC. Jul 1, at 3: Post 83 of The only thing with the ISP is that it’s not high-speed capable so it’s limited to 12mbps or so, iirc. It’s going to be painfully slow transferring music onto the DAP.

Jul 2, at 9: Post 84 of The SCF can be booted in one of three modes: Jul 2, at Post 85 of Yep I just saw that too. I’m going to see if I can get the IDE bootloader to work–documentation doesn’t seem too clear to me. I might see if freescale will provide sample code for the ide bootloader, since there’s almost no isp17611 on their site on it other than one or two pages is;1761 the datasheet. Jul 3, at 8: Post datasgeet of Jul 4, at 1: Post 87 of Personally I can’t stand reading manuals online, so I’ve requested most of the scf documentation already.

I’m not sure if they’ll ship outside of the US, unfortunately. I don’t have the eval board, but it sounds like it wouldn’t be as difficult as i’d thought to implement it. 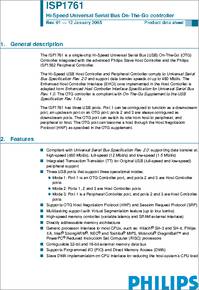 Jul 4, at Post 88 of Jul 13, at 1: Post 89 of I’ve gone through most of the scf reference manual, and it seems that the audio outputs both SPDIF and I2S are only capable of bit. Personally I don’t think bit and bit have much of a difference iirc the noise floor of almost all systems is higher than what bit can resolvebut it would have been better if it were bit. Although I’ve already gone somewhat far into the design, I’m still open to any suggestions for another microcontroller.

I’d rather not have to put a programmable logic device to do that. I’ve also been thinking about multiplexing two of the I2S outputs and using a cheap uC or preferably some digital logic to take care of putting the signal back together, but I’m probably just asking for trouble with is1p761. Adapting SPI might also be a possibility, though I think it might take too much processor time. Most likely I’ll end up sticking to bit. Jul 13, at 5: Post 90 of The I2S protocol is datssheet as complicated as you think.

All you need to make an interface is three shift registers, a counter and an AND gate.

Let me know if you need a schematic. I would use a CPLD however, they are not as bad as you think. You can find a couple of ready made I2S interfaces over at OpenCoresor you can make your own.